Force4Good: The Lake District is a competitive advantage

It’s not without a little apprehension that I approach the meeting point with Paul. Paul is a very good fell runner and ten years younger than me. I’ve also just got through Covid and we are running up The Old Man of Coniston (2,500ft, 7km) on Paul’s lunch break. Something Paul does most weeks. I run fells but at 57 I’m finding I’m a bit slower than I used to be and I was never in Paul’s league.

We set off at a reasonable jog up the track to Copper Mines. I quickly lay down how it’s going to work. “Paul, clearly it won’t be long before I’m blowing hard, and you will be running backwards and forwards jogging on the spot so I will ask you my questions now and then just listen for the next hour!”.

This is exactly how our time together pans out and Paul launches into a delicious narrative about the Lake District, his business and fell running. In the Lake District, running in the mountains (fells) is known locally as fell running and you would be absolutely amazed to see top-flight runners like Paul and how fast they can go uphill – think mountain goats!

Paul and I first met playing football for Hawkshead or Esthwaite Vale. He was still at school, I was a young business exec. Our first encounter wasn’t so great: I tackled him, and we were on the same side! He wasn’t impressed. Thirty years on, we are good friends but with families in between, the reality is I don’t see him very often.

This is the first chat we've had since the pandemic changed our lives and it is so great to see him.

Paul runs Coniston Corporate, which supplies work wear, school uniforms and other branded clothing. I’ve never asked much about the business but on the run, I hear a great example of how embracing new technology has built a very successful business in an unlikely place in the heart of the Lake District National Park.

An SME, Coniston Corporate has a long list of national businesses and schools who buy their uniforms and work wear bearing their branding, all supplied from HQ, just outside the picturesque tourist hot spot of Coniston.

Paul took a small business owned by his father, Colin, and revolutionised it by embracing the internet in those early days when online pictures were built in front of your eyes line by line! 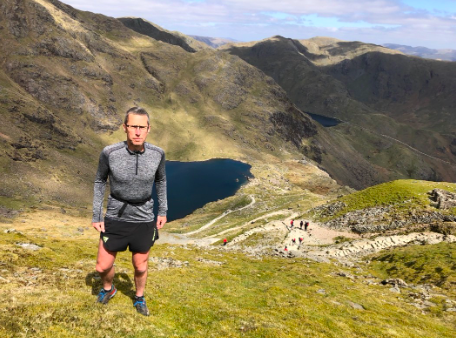 By creating an online shop in the days when most people didn’t, Coniston Corporate gained a competitive advantage and, along with excellent service, continues to be a leader in the national market. Paul is very happy with his business and its very loyal band of clients, including Impact.

“Give people good products with excellent service, and never rest on your laurels, and you have a good recipe for a successful SME,” he says.

Paul first climbed the Old Man of Coniston at the age of seven and it has been a key part of his life. He is very clear that having Coniston at the start of the business name is a great piece of positioning and customers have always been keen to visit.

Why fell running Paul? “Well, I used to play football, as you know, but with all team sports, it is demanding on time and getting groups together. The beauty of fell running is you can do it at any time, and you just need a pair of trainers and a bit of mountain know-how. I love the feeling of running and the excitement of racing.” Paul regularly competes in fell races, especially in Cumbria but also further afield. He races for Helm Hill of Kendal but also used to run a Coniston club which sadly no longer exists. I’m wearing my old Coniston vest today for old time sakes. As Paul says: “There are no egos in fell running, it’s very down to earth and there are some wonderful people that you meet in a fabulous environment all year round”.

The weekend after our run, purely by coincidence, Paul is running in the annual Coniston fell race. It is a brutal round taking in Wetherlam, Swirral and the Old Man. To me, that’s a three-hour run so I am astounded when Paul tells me he hopes to be finishing in one hour thirty and that the record is a little over one hour! Like I said before, a different league!

It is a very dry day and the ground has little give, very different from the usual damp, boggy fell sides. I notice Paul is wearing what I would see as winter footwear, Inov8 Mud claws – the nearest fell trainers get to being like football boots. Paul explains that as he descends fast, he needs deep studs on his heels to ensure his feet stay attached to the mountain.

My analogy of running with Paul is that it’s like taking a young fit dog for a walk. This is brought even more to life when he uses me to experiment with a decent line – a rare opportunity for him to try some different lines to see if they are faster by using me as the control. I find this experimentation fascinating as he’s clearly run this mountain hundreds of times but is still looking for marginal gains, a trait I suspect he also applies effectively to his business.

Paul was part of a record-breaking Helm Hill team that ran the famous Bob Graham route in the relay, and he is clearly proud of that, but when I push him for highlights of his running career it’s clearly more important to him to be out in the mountains than any single race achievement.

We finish in one hour thirty-nine minutes, back on the outskirts of Coniston village. I had hoped for one thirty, but we did dally for some photos and for me to get my breath back. If he was racing, Paul would do a straight up and back in about 50 minutes! 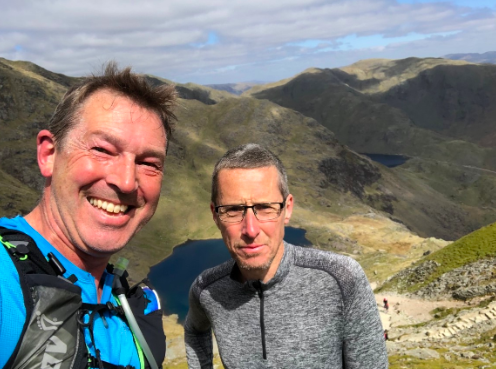 And so back to work for the afternoon shift. Great to hear some stories from Paul and seemingly from someone who has a great balance of business success, happy family life and living in an environment where he can indulge in a passion even on a working day at lunchtime.

Find out more about the Force4Good initiative, led by Impact's Andy Dickson here.