We have been reading...

“Man’s Search for Meaning” is one of those books I have been recommended many times and seen on friends’ book shelves, but for some reason been hesitant to read for quite some time.

Written by Dr. Victor E. Frankl, an Austrian psychotherapist, the book is a 150-pages story about human tragedy, hope and the search for meaning, shared through the torturous lens of a Holocaust death camp.

When I finally started the book, it was during a long train journey. Frankl’s words still haunt me: “Everything can be taken from a man but one thing: the last of the human freedoms – to choose one’s attitude in any given set of circumstances, to choose one’s way”. The mindset that human beings have the power to decide how they react to what happens to them and whether they move forward afterwards, comes as a strong revelation. The book is simply split into three parts: Frankl’s experiences in the concentration camp, a theoretical essay on logotherapy (a therapy focused on the personal search for life’s meaning) and “The Case for a Tragic Optimism”, written as a postscript.

Frankl, a young Jewish psychologist, chose to stay in Vienna and face Nazi persecution alongside his parents, brother and pregnant wife, instead of accepting an American visa and leaving them behind. He then loses his whole family and spends years in concentration camps, facing starvation, disease, freezing weather, hard labour, cruelty and the everyday threat of death. His book tells the fascinating story of the power of human spirit and the ability to see opportunity in the least expected of times.

“Man’s Search for Meaning” is a book worth reading and most definitely worth keeping. While reading it, if you are an old-school reader like me, you’ll feel like grabbing a pencil and highlighting dozens of profound quotes. One of the most memorable ones is Frankl’s conviction that happiness and success are by-products of a meaningful life. 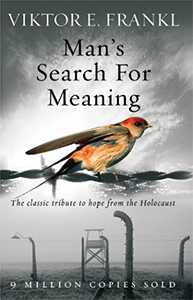 “Again and again I therefore admonish my students in Europe and America: Don’t aim at success - the more you aim at it and make it a target, the more you are going to miss it. For success, like happiness, cannot be pursued; it must ensue, and it only does so as the unintended side effect of one’s personal dedication to a cause greater than oneself or as the by-product of one’s surrender to a person other than oneself. Happiness must happen, and the same holds for success: you have to let it happen by not caring about it. I want you to listen to what your conscience commands you to do and go on to carry it out to the best of your knowledge. Then you will live to see that in the long-run—in the long-run, I say! - success will follow you precisely because you had forgotten to think about it.”

Frankl describes three possible ways of finding meaning in life: in working on a project that is significant to you, in love for someone or something, and in the courage during hard times.

While remembering the face of his wife, Frankl is transfixed by a simple truth: “love is the ultimate and the highest goal to which man can aspire…The salvation of man is through love and in love. I understood how a man who has nothing left in this world may still know bliss, be it only for a brief moment, in the contemplation of his beloved.”

It is the heartfelt confession of a man, who has lost everything, but himself, who chooses not to wither away, despite of it all. It’s a real tribute to hope and one of the most remarkable pieces of literature to emerge from the Holocaust.

It's not easy being a leader in today's world. Making sense of the ever-changing challenges brought on by politics, economics, society and the environment is a huge and often overwhelming task. Frankl's insights on how to maintain a positive mindset in the face of adversity provide invaluable lessons for anyone looking to improve their agility and resilience in today's world – and tomorrow's.