I’m at the Royal Geographical Society (RGS) with Jonathan Stevens, chair of the RGS North-West region. I did a talk for Jonathan a year ago when I did the Frog Graham and Frog Whitton ultras, and he’s lured me to London again with the promise of maps! I met my wife in a map room, and since then, we have had three kids who all studied at least A-level Geography. My wife is still teaching it!

We are looking at a map of the world from 1650, and it is remarkably accurate, with just New Zealand seemingly missing. But even some of today’s maps make that big oversight, much to our Impact New Zealand colleagues’ understandable annoyance.

I think it is fair to say that Jonathan is a passionate geographer. It has played a massive part in his life, as it has mine. Today we are touring the amazing artefacts you can view in the RGS in Kensington Gore: from platinum prints of Shackleton’s expedition to Livingstone’s compass; from Gino Watkins’ Inuit kayak to Mallory’s final Everest camp photo. Adventure is everywhere, and from days when I suspect risk assessments were probably non-existent!

Jonathan is supporting Impact’s #Force4Good alongside chairing the RGS’ North West Region’s own events series, which raise awareness of SDGs.

Jonathan explains that adventure is bringing the Sustainable Development Goals to life for a broader audience. “It’s leadership action for what the planet needs, inspiring practical daily actions we can all do to engage people with the SDGs.”

We have just attended the RGS medal ceremony. We see an award for monitoring flooding in Bhutan. “What a great example of work that contributes to the SDGs covering the risks posed by climate change and land usage. Geography is where the natural environment meets communities,” says Jonathan. “It’s all-encompassing. Geography encapsulates all the other natural sciences.”

“Being a fellow of the RGS is important to me,” says Jonathan. “Geography has shaped my life, who I am, where I live, and how I make a living. I love the sense of history, the adventure, the expeditions, the artefacts, the way boundaries were pushed, and discoveries made.”

We have our photo taken under the Shackleton statue. “What a great example of human-centred leadership”, says Jonathan. “When the expedition hit major challenges, the expedition became all about getting the men back safe and sound. He got them all back.” 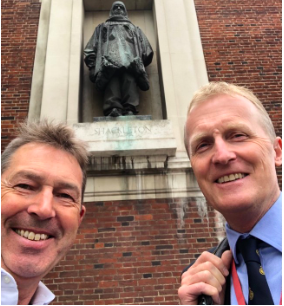 Jonathan is a leadership consultant, facilitating leadership development all over the world, often on Impact’s behalf. He lives in the Lake District and has done for 30 years. He’s independent now but worked for Impact for over 25 years.

“It enabled me to combine all the loves of my life, including my family, the Lake District, travel, and a passion for how people work together. It is an amazing organisation, and I love the idea of the Force4Good as it is engaging the Impact team in an adventure true to Impact’s guiding principles. It's also a journey through the wonderful Lake District, the place I call home, which is a great example of a landscape still coming to terms with the geography of where people meet nature. It’s a beautiful landscape, but very little of it is natural. It has been shaped by human interference, much of which we are still learning to manage after clearances, grazing, farming, and now, attempts to rewild.”

There are lots of talks and activities that you can join at www.rgs.org, which can help you get directly involved in making a difference with the Sustainable Development Goals.