I was asked recently to write a new year’s article. Something about, good wishes and our hope for 2018.  This is what I wrote instead …

So, then I started to base the blog on some of the messages I had been sent this year. I was particularly interested in the email signatures and messages I’d seen on Linkedin. You know the sort of thing ‘Out with the old, in with the new. Let’s do this, the best year yet, shake things up a bit.’ I was interested in this renewed optimism and what it was based on. How in fact nothing really has changed except people’s mindset has shifted. But this article lost steam so I didn’t finish it…

Then I was interested in the idea of writing a blog about health and happiness. About keeping healthy in the New Year with a particular focus on mental health and wellbeing. How managing energy through the year is important. How, in order to do this I need to say ‘No’ more and, sleep more…but I couldn’t really find the motivation to start this one…

Then I wanted to base the article on something I read in the newspaper, that 75 billion sms messages were sent on New Year’s Eve. That a revolution of the sun spurred on this outpouring of love and good will. I reflected on the fact that I only received one ‘Happy New Year’ message and it was a text from my mum. I wanted to write about the fact that I sent no text messages this year. I wanted to write an article mourning the lost art of letter writing. I thought about the last time I’d received a letter from a friend, it was probably 10 year’s ago. I thought about all the people I’d lost touch with. I thought about how easy it would be to write a letter to connect with them again. But then some stuff happened, and I didn’t do anything, some laundry probably, or tidying up my kids toys … and I didn’t write that article either.

Much like a good New Year resolution, I had many ideas and aspirations and didn’t really finish any of them. I don’t think that really matters, the intent was there and in many cases that is sometimes enough.

So, happy New Year everyone, let’s focus on the process and the direction not just the destination let’s shift our mindsets and make 2018 awesome, let’s sleep more, let’s write letters and connect with friends we’ve lost touch with.

Oh and here are two superb things I have read this year.

I have not seen the plays in town
only computer printouts
I have not read the latest books
only the Wall Street Journal
I have not heard birds sing this year
only the ringing of phones
I have not taken a walk anywhere
but from the parking lot to my office
I have not shared a feeling in years
but my thoughts are known to all
I have not listened to my own needs
but what I want I get
I have not shed a tear in ages
I have arrived
is this where I was going? 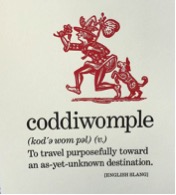 2018 I will try to coddiwomple much more.

Dominic Fitch is Head of Creative Change at Impact.