We asked Impact's Penelope Mavor for some top tips on facilitating multicultural teams.

Penelope is a New Zealander, British citizen and lives in Rome, and has been facilitating multicultural groups and teams for the last 15 years.

When it comes to facilitating a multicultural team, what is usually the biggest challenge?

When working with a multicultural team, creating an environment in which each person can feel safe to be curious and open-minded can be complex and requires time and patience. As Tuckman identified, a team can go through processes of forming, storming, norming and performing…and, in a team with many differences, the storming phase can be more intense. Space needs to be given to allow this to happen in a constructive way.

Perhaps. Although in my experience, the more layers of cultures there are – national, regional, professional, gender, class, religion, generational, ethnic, corporate, personal - the more complex and rich the team is. The depth of this richness also means an intensity of potential – to go really well or really badly!

A number of formal studies (including Dr. Carol Kovach, from the Graduate School of Management at the University of California at Los Angeles and Nancy Adler’s work) and a wealth of anecdotal evidence suggest that diverse teams tend to perform either better or worse than homogeneous ones, with more performing worse than better. 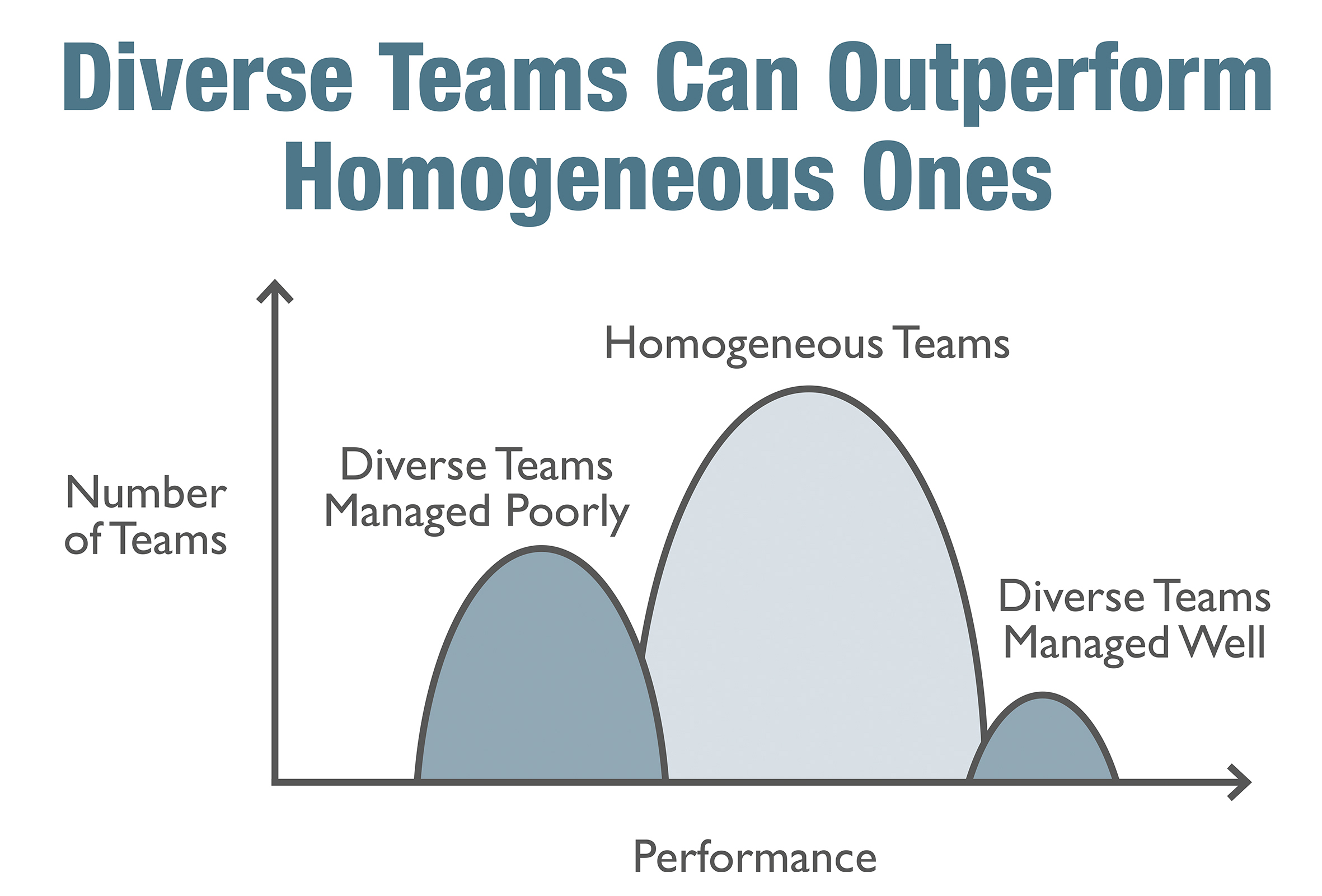 So, what tools and approaches might give diverse teams a chance at being in that high performance category?

Anything that encourages people to be interested in each other, to communicate and to bridge understanding. Schein describes culture by using an analogy of an onion. The outer layers are the products and artefacts of culture we can see, hear or feel and peeling layer by layer you go deeper, in towards the ideals which mould our behaviour, norms and values. As a facilitator or a team leader, it is important to find ways to reveal these layers.

It’s good to encourage the team to explore the outer layers first. We often introduce sessions with a light-hearted exercise based around stereotypes. Stereotypes exist for a reason - it is only when we get stuck in them that they become a barrier. The exercise is a fun way to raise the topic of diversity and start exploring differences.

To go deeper into the layers, we often draw on the work from leading authorities like Geert Hofstede, Fons Trompenaars, Charles Hampden-Turner, Edward T.Hall and Richard Lewis, who have created cultural orientations (scales/dimensions) to understand differences and similarities. Discussions may centre around cultural tendencies to focus more on rules or relationships, what is and isn’t considered acceptable when displaying emotions or giving feedback, how power is perceived, and whether individuals seek to control their environment or work in harmony with it.

Are you more likely to encounter conflict/differences of opinion?

I would say yes, simply because we are perhaps more sensitive when working in a multicultural team. We consciously or unconsciously put up our defenses because we expect not to understand or agree. Communication between people is hard enough but when faced with different cultures, the challenges and complexities increase. And so does the spark, energy and creativity!

In principle it is the same, but in practice it may take longer to help each party to see both sides of the argument or the reasons for the thinking behind it. We are human, we all have our different ways of thinking, behaving, communicating...and forgiving. At a practical level with a group and a team, it helps to have established ground rules, such as the principle of good intentions and openness, like try not to cause offence, try not to take offence. It also helps if we work on our flexibility - to hold more than one truth, or embrace paradox.  It can start with introducing the idea that the opposite can also be true - such as Derek Sivers reminds us in this TED video.

How do you deal with language barriers?

As native English speakers with non-native English speakers, it is important to speak slower, and try not to use idioms. In a group where there is one (or more) people who face a really big language barrier then I try to introduce a buddy system, so that everyone can feel safe and included, be given time to be heard and receive respect for the contribution they make.

What role does technology play? Does it help or hinder?

Both! For technology to play a valuable role in improving the performance of a multicultural team I find you need to take time to build the team as well as focus on tasks. Online technical communication is dependent on PRIOR social relations. It is also worth investing time in trying to remove all the possible barriers which inhibit communication and understanding online – make sure you all have good, reliable equipment, and that everyone is skilled and equipped to use the technology. Basic terminology such as ‘meeting’, ‘discussion’ and ‘autonomy’ all may need clarified because they come with their own cultural bias and we can’t assume we have the same meaning.

Any other advice you can give?

To leverage the diversity of a team you need to enjoy it, to embrace it as an attitude, a philosophy and a way of being and doing. Take time to uncover and share differences, accept them and explore ways to create new understanding or ideas out of them,  – then you can look forward to moving into that high performing area of the graph above!

Have you worked with multicultural teams? What are your top tips? We want to hear from you!